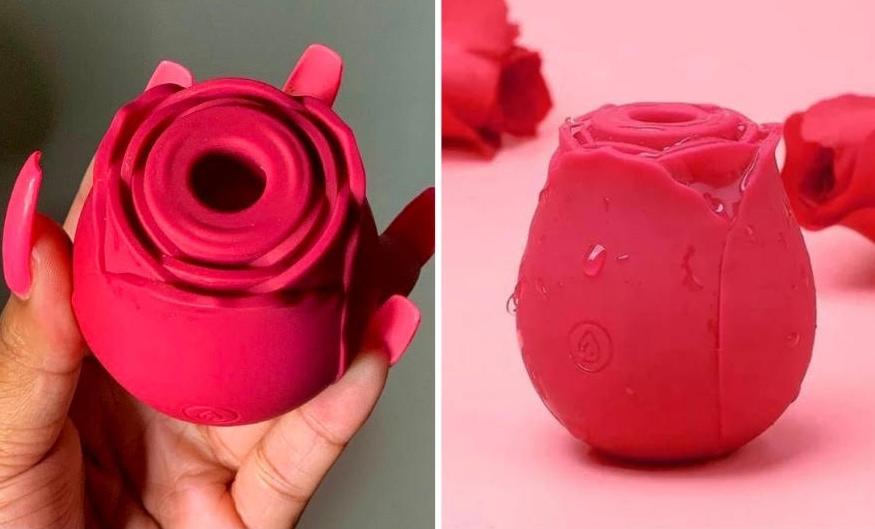 Let me tell you about my experience with this fantastic sex toy! A client decided he wanted me to have a toy that sucks on my pretty little pussy while we played on our calls. Obviously, I have heard of sucker toys, but I never tried one. It was so good I had to write about it!

Honestly, I was excited that I would get to try a Sucking Rose! Well, when I looked it up shipping was going to take forever so I decided to make a special trip to my local sex shop. I always have so much fun when I go. Seriously, the workers are really cool and they know that I am a phone sex operator. They always have a ton of suggestions for toys and porn to try! I just love being surrounded by equally kinky people. Well, when I got there and explained that a client had decided that he wanted it to feel like his face was buried deep into my tight snatch, the clerk just gushed about how spectacular this toy was.

She took some time to explain the difference between the sucking toy and the one with the tongue. Of course, my kinky ass picked the suction. There is something about my clit getting sucked on that drives me wild. Must be the Dom in me. She sent me home with a water-based lube and my little pink toy. Now, I was feeling super impatient. To be honest, I did not want to get home and have to charge this thing. So, I plugged it into the car charger and hoped I would not get pulled over. Luckily, by the time I got home, the charging light had turned green.

Grabbing my sex toy I rushed into the house straight into my bedroom.

First, I stripped all the way down laying on my bed completely naked I skyped my client and asked if he wanted to be there for the 1st try. Thankfully, he told me he wanted me to practice with it so that he could use it for some teasing and denial when it was time. I rolled onto my back and started pulling on my nipples softly. They were already pretty hard because I had been horny since before I got to the sex store. My kitty purred and demanded attention. So, I reached over and grabbed the toy with my right hand. Flipping through the vibration speed sent chills through my body. Seriously, I could not wait! Turning it onto the lowest setting I held it up to my nipple. Damm what a sensation!

My pussy was creaming and I had not even put the toy on it yet. Clearly, the client had the right idea I was going to cum very fast with this thing. If he wanted to deny my orgasm using this sex toy it was going to take a ton of practice. Slowly, I trailed the suction down my midsection. Goosebumps covered my bare skin. Who knew was the only thing that I could think of as I reached my little patch of pussy hair. Skipping the hair both because I did not want to wait and also because I was afraid they would get caught in the suction. Quickly. I pressed it hard into my clit. Even on the lowest setting, I was impressed. The sex toy lightly tugged on my lips and my back arched in response.

It was time to turn this sex toy up a notch!

So, I hit the button on the side and allowed myself to get carried away. Playing through the setting and trying them all. Cumming over and over again. Seriously, I squirted so much that I had to get a towel to soak up the wet spot on my mattress. I lost count of the number of times that I came. Using the very last bit of strength that I had I rolled over and skyped my client once more. Giving him every detail of my 1st time playing with a clit sucker! If I could manage this alone what was going to happen when I played with someone else?